Sleek and elegant, the North American P-51D Mustang was truly a "fighter pilot's dream." It is perhaps the best known fighter aircraft of all time. Designed in record time at the request of the British in 1940, the Mustang possessed a deadly combination of speed, endurance, maneuverability and firepower. By t

he end of the Mustang's production run, more than 15,000 P-51s had been built and the aircraft had seen service around the world as an escort fighter, fighter/bomber, dive bomber, reconnaissance aircraft, and finally, a race plane. The Mustang first drew blood in the spring of 1942 and the last Mustangs were withdrawn from active service more than four decades later - a service record which no other fighter aircraft has been able to match.

Manufacture of the Mustang began in early 1941 at North American's Inglewood, California plant. As orders for the new fighter quickly increased, North American opened a new plant near Dallas, in Grand Prairie, Texas to assist in the production of the P-51.

Originally fitted with an Allison V-1710 engine, the Mustang proved to be a superb fighter at low to medium altitudes, but its performance dropped off above 12,000 feet. At the urging of a Rolls Royce test pilot, a few RAF P-51s were tested with a Rolls Royce Merlin engine and the Mustang found new legs. The P-51D rolled out of the factory with a Packard V-1650.  The Packard V-1650 is a US built Rolls Royce Merlin produced under license by the Packard Motor Car Company.  With the powerful, supercharged Merlin, the Mustang's high altitude performance drastically increased as did the plane's range. This immediate boost in range allowed the plane (with drop tanks) to escort American bombers into the heart of Germany or Japan and back. Once the bombers had full fighter coverage, the air war for Europe and the Pacific was as good as won. 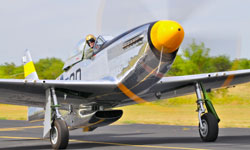 The museum's P-51D was manufactured in 1944 and shipped to England. It was assigned to the 9th Air Force, 370th Fighter Group, 401st Fighter Squadron, and was flown by Lt. Hjalmar Johnsen. In June 1947 it was sold to the Swedish Air Force and served as Flygyapnet (FV) Serial No. 26115 based at F-4, Ostersund. Between 1952-53 it was sold to the Dominican Republic and served as Fuerza Aerea Dominica Serial No. 1918 until 1984 when it was retired from active service. The plane is painted in the colors and markings of Lt. Hjalmar Johnsen while in service with 401st Fighter Squadron, 370th Fighter Group, of the 9th Air Force during World War II.