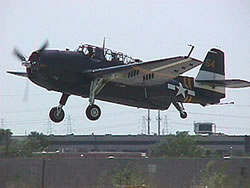 The Grumman Avenger is truly an unsung hero of World War II. Designed in 1939, the Avenger fought a global war in some of the most adverse conditions imaginable. The plane seldom won the fame it so rightly deserved and most Avengers spent their careers conducting routine and mundane, but critical patrol duties. At the time of Pearl Harbor, the U.S. Navy's premier torpedo bomber was the obsolete Douglas TBD Devastator. Although the TBD was little more than two years old, the Navy recognized that it needed a more capable torpedo plane and needed it quickly. Both Chance-Vought and Grumman responded to the Navy's requests for a new torpedo bomber. The Grumman XTBF-1 proved to be faster, lighter, better armed, and carried a larger payload than the Chance-Vought design. The Grumman design impressed the Navy, which placed an order for the new plane in December 1940. The prototype flew on August 7,1941 and the first TBFs reached operational squadrons in January 1942. Entering service so soon after the Japanese attack on Pearl Harbor, the new aircraft was appropriately named the “Avenger,” although her crews nicknamed the plane the “Turkey.”

Grumman designed the Avenger as a torpedo bomber, but the plane could carry bombs in the internal bomb bay or a mixed load of depth charges and 5-inch rockets under the wings. Avengers were superb sub hunters and both the U.S Navy and Royal Navy used the plane to hunt German submarines that preyed upon Allied shipping in the North Atlantic and Arctic Ocean. In the Pacific, Avengers hunted down the Japanese surface fleet and supported Marine and Army troops during island landings. Former President George Bush piloted both the TBF-1C and TBM-1C versions of the Avenger and was forced to bail out of a VT-51 TBM in the Pacific. He narrowly escaped capture by the Japanese and was quickly rescued by a U.S. Navy submarine. 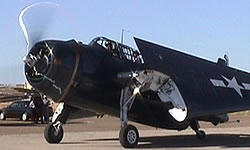 By 1943 Grumman was turning out more than 150 Avengers a month. However, the F6F Hellcat was the company's top priority, so the Navy arranged to have the Avenger built by General Motors in five idle East Coast automobile plants. The General Motors TBM Avenger was virtually identical to the Grumman-built TBF. Eastern Aircraft, General Motor's aircraft division, produced TBMs at an astounding rate, turning out 400 TBMs in March 1945 alone. Eastern built 7,546 TBMs or 77% of all Avengers produced. When the Avenger production lines stopped in 1945, nearly 10,000 Avengers had been built, making the aircraft the most produced naval strike aircraft of all time.

The Cavanaugh Flight Museum's TBM-3E was built in 1944 and is believed to have served with the U.S. Navy in San Diego. The aircraft is painted in the scheme of Marine Torpedo Squadron 132 from the escort carrier U.S.S. Cape Glouchester (CVE-109) during World War II