Arthur M. Young of the Bell Aircraft Company began development of Bell's first helicopter in September 1941. The prototype (model 30) made its first unteathered flight in June 1943. Improvements to the model 30 led to the development of the model 47 which made its first flight in December 1945. In 1946, the Bell 47 became the first helicopter to be certified for civilian use. The US Air Force announced a military version, the YR-13, in 1947. The US Army placed their initial order in 1948 and designated them H-13B "Sioux" and thereafter all Army helicopters have been named with American Indian Nation names. 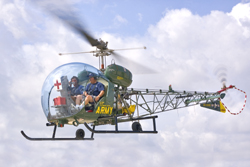 During the Korean Conflict, fifteen H-13s were converted for medical evacuation using two external litters. The two-seat H-13D soon followed with a larger engine, the familiar Plexiglas "goldfish bowl" canopy and twin-skids instead of the earlier four-wheeled landing gear. The H-13D became famous in the motion picture and television production "M*A*S*H" (Mobile Army Surgical Hospital) which portrayed its use in the Korean War.

During the Vietnam War the H-13 was used for basic and instrument training of helicopter pilots. More than 300 OH-13s served as part of 1300 training aircraft at the U.S. Army Helicopter Primary Training Center at Fort Wolters near Mineral Wells, Texas. It was also during the Vietnam War, that the US Army Air Cavalry modified H-13s with twin .30 caliber, and others with twin 7.62mm machine guns, to test the effectiveness of armed scout helicopters in combat.

During its 27 year production run, more than 5000 model 47s were produced in more than 20 variants for civilian and military configurations, and used by 40 different countries 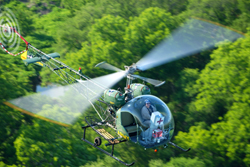 The Cavanaugh Flight Museum's TH-13T, serial no. 65-8040 was built at the Bell plant in Fort Worth Texas on October 25, 1965. The aircraft served with the US Army as a trainer at Fort Gordon Georgia. It was obtained for the Museum in 2006 and is completely restored. It is painted to replicate the early Viet Nam scheme of the H-13D.