Named after General Billy Mitchell, the Army Air Corps' most famous figure of the 1920s and 1930s, the North American B-25 proved to be one of the best American weapons of World War II. First flown on August 19,1940, the B-25 was a rugged, adaptable and accurate medium bomber. Famed for its role in the Doolittle Raid on Japan, the B-25 served around the world and flew with several air forces. North American produced the Mitchell in many different models, nearly 10,000 B-25s in all. 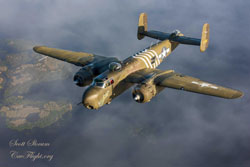 The Mitchell proved to be highly flexible and was fitted with a wide variety of armaments. Some versions of the B-25 were armed with no less than fourteen forward firing .50 cal. machine guns; while the B-25H boasted a 75mm cannon mounted in the nose. Besides being used as a horizontal bomber, the B-25 was used as a low-level attack and anti-shipping aircraft. Since the end of World War II, B-25s have been used as private transports and are common participants at air shows.

The museum's B-25H, s/n 43-4106 was manufactured in the North American Aviation factory in Englewood, California in 1943, and is the #2 prototype of the "H" model. During WWII, this B-25H served stateside until 1947, when it was declared surplus and sold it to the Bendix Corporation who used it as a test aircraft, in the development of new jet fighter landing gear systems.

Although 43-4106 did not serve in combat, the restoration group decided to paint the aircraft in the colors of a combat veteran B-25H. Their choice was the B-25H "Barbie III" as flown by Lt. Col. Robert T. "R.T." Smith in 1944. Lt. Col. Smith was one of the original members of the American Volunteer Group (AVG) also known as the "Flying Tigers", protecting China as part of the Nationalist Chinese Air Force before the United States entered WWII. After the AVG disbanded in 1942 he returned stateside for a time as the Commanding Officer of the 337th Fighter Squadron, 329th Fighter Group in California. Smith volunteered to return to the China-Burma-India theater (CBI) of the war with the 1st Air Commando Group of the 10th Air Force as commander of the group's B-25 Mitchell squadron in low-level attack and bombing missions. His aircraft, the "Barbie III" was named in honor of his wife, Barbara Bradford, who he married shortly before he departed for the CBI. Lt. Col R.T. Smith flew a total of 55 combat missions in the aircraft over Burma and was awarded the Air Medal, Distinguished Flying Cross, and Silver Star.